Well things went a little better today. As I’m still waiting for my varnish to arrive I thought I would press on and finish the tracks while there was still some amusment left in the assembly job. The good news is it went a little faster today, probably about 5 hours, and I didn’t cut myself once. However I did find that stabbing yourself with the track-pin wire while assembling the links was almost as painful. No I lie – much more painful. When I stabbed one of the places I cut last night ….. it quickly bought on a little moment of quiet instrospection, followed by a long session where I babbled incoherently inventing new words until the pain subsided enough to swear in a manly fashion.

So tracks are done and dusted, might have to remove a link from the RHS but apart from that they look damn good I think ….. 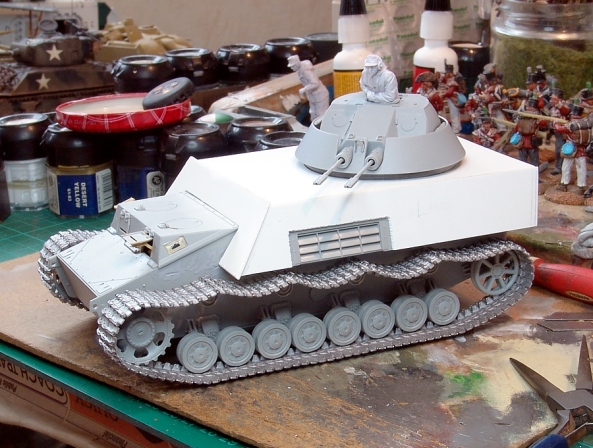 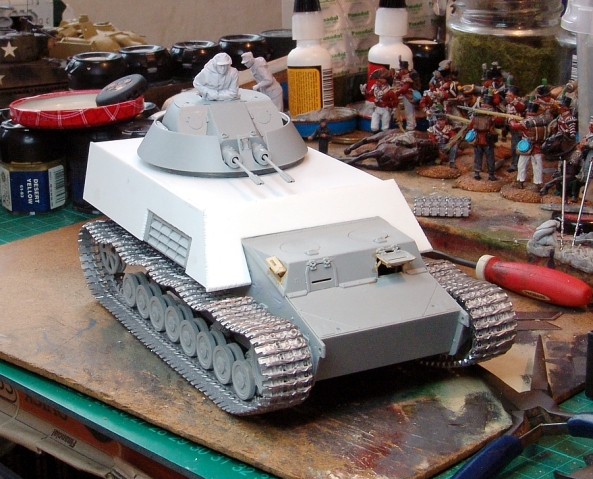 Oh the joys of new bitz and brotherly comraderie, shiney new stuff brought for me by my brother purely out of the kindess in his heart …. yeah right! He’ll extract his pound of flesh in due course, in the meantime though I have some metal workable tracks to build ……

Despite the coolness of this package I’m beginning to have my doubts. All those tiny PE bits and I have no soldering iron …. and those tracks …. I feel pain coming on.

I so feel pain coming on ……. literally, an hour in and I’ve hardly made a dent in them, although I’ve cut my finger twice and bled about a litre of valuable life blood all over these damn things. Having to scrape the flash off the tracks with a scalpel blade is actually quite dangerous ….. not to mention the metal filings that have gotten into the cuts. Haven’t had this much fun filing metal since, well, never.

10.30pm and I’m about four hours in, if there was anything decent on TV I’d throw the towel in for the night and curl up and cry. No one told me metal tracks were a three day task.

2.30am and I’ve completed one run of track, roughly 8 hours work give or take. Despite the friggin difficulty of it all, I must admit they do look pretty swisho, my first girlfriend looked the same, delicious but eventually the novelty wears off. AND NO way is it fun modelling, must be one of those life lesson thingies where all the hard work pays off in the end …. yeah thats it …. it’s a life lesson.